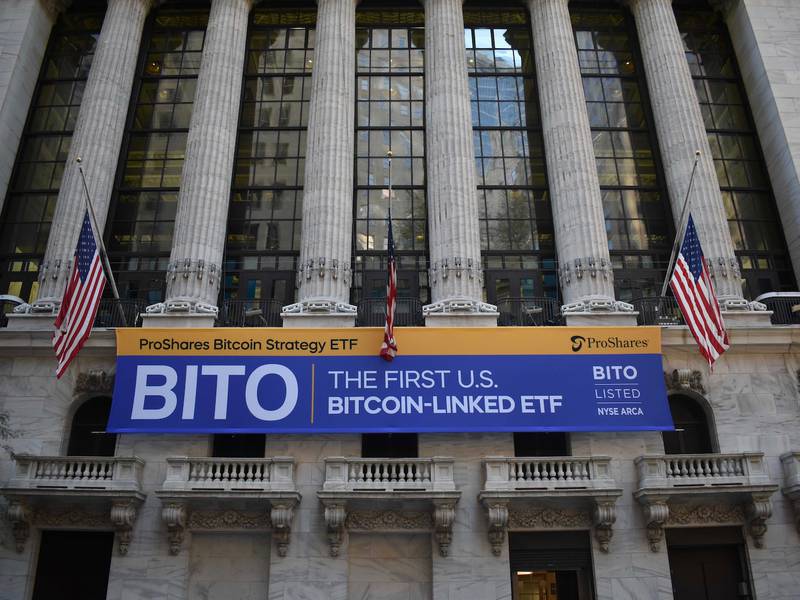 ProShares, the fund’s sponsor, announced the level of assets in an emailed notice from a press representative. The ProShares Bitcoin Strategy Fund, which launched Tuesday on the New York Stock Exchange under the ticker BITO, had $20 million of seed capital at the start of the day.
The fund also saw about $1 billion of trading volume on the first day, ProShares said. That made it the second-most heavily traded new ETF on record, the firm said, citing Bloomberg.

Dave Nadig, chief investment officer and director of research of ETF Trends, said that much of Tuesday’s trading volume appeared to come from retail investors, since there were few large “block” trades of the size that big institutional traders often deal in.

“This is probably going to be what we all expected, which is it’s an access vehicle for certain players in the marketplace,” Nadig said in a phone interview. “There’s lots of folks who are active participants in the markets who just don’t want to cross over the crypto bridge by themselves.”

The new ETF’s debut came as bitcoin’s price surged Tuesday to a six-month high, climbing toward the all-time high near $65,000 set in April.

Matt Hougan, chief investment officer of Bitwise Asset Management, said in emailed comments that the strong first-day showing “suggests there is a large amount of capital that is still excluded from the crypto market simply because it’s hard to access.”

“That will change over time, and that capital will enter the market,” Hougan said. “That’s a pretty bullish signal for the long term.”

Jeff Dorman, chief investment officer of Arca Funds, wrote in a newsletter Tuesday that “this was a long, arduous road for many, and becomes yet another indication that digital assets are crossing into mainstream.”

The first of its kind in the U.S., the ProShares ETF offers investors the opportunity to gain exposure to returns of bitcoin with the ease of buying an ETF in a brokerage account.

The U.S. Securities and Exchange Commission (SEC) approved the ETF on Friday, and several other pending ETF proposals could win approval from the SEC later this week.

The ProShares ETF is structured to invest in bitcoin futures contracts traded on the Chicago-based CME, rather than investing in the cryptocurrency directly.

So the ETF by itself won’t introduce any new demand for bitcoin. However, traders might buy more bitcoin as they look to hedge against the futures price or take advantage of pricing disparities.